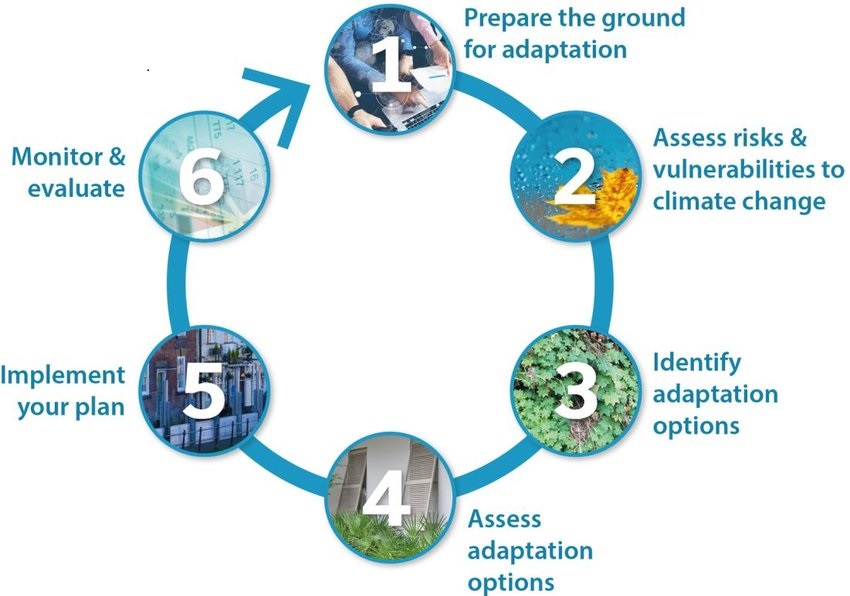 Saudi Arabia has a semi-arid to hyper-arid climate and as such highly vulnerable to the adverse effects of climate change-induced extreme weather phenomena. Hence the Kingdom continues to invest considerable efforts and resources in activities that enhance resilience, protect and renew the Kingdom’s natural environment including protection of the biodiversity of land, seas and coastlines. Saudi Arabia differentiates its adaptation measures into those with mitigation co-benefits and those that are entirely aimed at adaptation and raising resilience. Adaptation measures can also contribute to economic diversification and English version.

The Kingdom designed a number of adaptation measures with mitigation co-benefits which are at varying stages of implementation and they include:
Water and waste water management:  To raise its implement actions that will promote and encourage the reduction, recycle and reuse of water and wastewater in the municipal, industrial and commercial sectors in a manner that will reduce energy consumption, desalinated water production and unground leakage.
Urban planning: Saudi Arabia has undertaken actions help promote the development and use of mass transport systems in urban areas such as Riyadh, Jeddah, and Dammam.  The projects are at different stages of development.
Marine Protection: The Kingdom is implementing coastal management strategies that are designed to reduce coastal erosion, increase the sinks for blue carbon, maintain related ecosystems and address the threats that climate change poses for marine livelihoods. It is also supporting the planting of mangrove seedlings along its coasts. Additionally, actions are being taken to strengthen and enhance the coral reef restoration program throughout the north-western Arabian Gulf.

Reduced desertification:  The Kingdom of Saudi Arabia has undertaken several measures aimed at enhancing desertification management.  These include actions that will promote the stabilization of sand movements around cities and roads, while increasing sinks for capacity through using green belts as barriers.  The Kingdom is also developing and enhancing the resilience of arid and semi-arid rural areas through various natural resource conservation activities, biodiversity and eco-system based adaptation efforts.  The aim of these initiatives is to improve soil quality, water, pasture and wildlife resources through a system of protected areas and reserves. Adaptation measures yielding mitigation co-benefits include those relating to reducing land degradation and improving land management practices, especially for agriculture and forestry.

Adaptation undertakings
The following adaptation actions are expected to raise resilience of the Kingdom of Saudi Arabia to the adverse impacts of climate change:

Integrated coastal zone management planning (ICZM): The development and implementation of ICZM plans are some the actions the Kingdom intends to undertake to protect coastal infrastructures such as roads, residential areas, industrial complexes, desalination plants, seaports, etc. from the adverse impacts of sea level rise and coastal erosion and inundation;
Early Warning Systems (EWS): Saudi intends to develop and operationalize EWS that would reduce vulnerability due to extreme weather events such as rainstorms, floods and dust storms by increasing resilience of infrastructure;
Integrated water management planning:  The rational management of water resources is one of the key priorities of the Kingdom of Saudi Arabia.  The Kingdom intends to develop and implement plans that will harness new sources of freshwater, construct additional dams for collection of drinking water and recharging of aquifers.